As we approach the end of 2022, the work for our Knowledge Exchange-commissioned project „Risks and Trust in pursuit of a well-functioning Persistent Identifier infrastructure for research“ is by now largely complete. The final report “Building the Plane as We Fly It: The Promise of Persistent Identifiers” and the remaining case studies are still to be released (expected date is early Feb 2023) and there will be a few dissemination activities for this work in Q1 2023, but the interviews, the desk research and the writing up of these outputs are already done with. It’s been a long journey since the scidecode team for the project (composed of – in alphabetical order – Pablo de Castro, Ulrich Herb, Laura Rothfritz and Joachim Schöpfel) held the kick-off meeting with the KE Task & Finish Group for PIDs back in Sep 2021.

The release of the PID project outputs has been gradual during this year of 2022. Back in the Spring the team considered the work on this project to be sufficiently advanced – all interviews with PID experts had been completed by then and we were already drafting the case studies, the summary of the findings and the recommendations – as to submit an extended abstract to the euroCRIS CRIS2022 Conference that would be held May 12-14 in Dubrovnik (Croatia).

The proposal for a CRIS2022 Conference contribution was accepted by the programme committee and a presentation was delivered on May 12th to a 100-strong audience of experts in research information management. The presentation made emphasis on the power of the (under construction) PID graph, provided a snapshot of the current PID landscape on the basis of the emerging case studies and raised the most relevant risks and trust-related issues that the team had identified at the time. This CRIS2022 presentation was later expanded into the 8-page conference paper „Some reflections on the current PID landscape – with an emphasis on risks and trust issues“ to be published in the CRIS2022 conference proceedings.

The special issue of Procedia Computer Science in which the CRIS2022 proceedings were published was released on Nov 16th. Although there had been previous project presentations that mostly described the work to be done, this conference paper on the PID landscape was the first ’serious‘ output from the KE project. The paper already included a list and brief introduction to each of the seven case studies produced by the project team:

Barely a couple of weeks after the Procedia conference paper the first case study from the project was released by the Knowledge Exchange. This was the case study on the (key) role of funders. The case study – largely devoted to the emergence of DOI-based grant IDs and RAiDs as well as to the examination of possible funder coordination forums where the frontrunners may be able to share their best practices with other funders – was published on Nov 29th and less than a month after its release it’s already on the verge of 500 downloads in Zenodo.

The release of this case study took place just in time for its findings to be explored in the Nov 30-Dec 2 Autumn 2022 euroCRIS Strategic Membership Meeting in Nijmegen (Netherlands). The programme for this event included (among many others) the presentation “A Persistent Identifier Strategy for NWO” by Maria Cruz, Senior Policy Advisor on Open Science at the Dutch Research Council (NWO). The NWO are one of the frontrunners mentioned above and in Apr 2021 they released a PID strategy document in which the funder expressed its intention to make emphasis on three key PIDs as part of their national-level PID strategy in the Netherlands: ORCIDs, RORs and DOI-based grant IDs.

In her presentation, Maria Cruz outlined the benefits funders may expect to obtain from the use of PIDs such as DOI-based grant IDs. She also explained why the current internal IDs that funders use for issuing their grant numbers may not be sufficiently unique and may create problems for researchers when acknowledging their funding streams in their manuscripts.

Besides directly taking part in these discussions with relevant stakeholders, the release of the first PID project outputs has offered the team at scidecode the possibility of addressing some low-hanging-fruit issues identified during the desk research. These are relatively minor problems – usually PIDs that fail to resolve – that in a best-case scenario can easily be tackled by dropping a friendly message on social media to the appropriate stakeholder. We are for instance particularly proud to have had an issue fixed that is featured on the ‚role of funders‘ case study – even if it means that the information on the case study has automatically become outdated.

This involved an issue – incidentally a very timely one for a study looking into risks associated with PIDs – where the first ever DOI-based grant ID minted by EuropePMC on behalf of the Wellcome Trust failed to resolve due to a change on the URL for the grant landing page after the persistent identifier had been created. A tweet highlighting this problem was enough for the EuropePMC team to quickly get it fixed.

In a further example for this minor interventions to get small issues fixed, another tweet was issued by a scidecode team member to highlight the fact that specific DOIs for publications of his were not resolving. Again the reply came rather quickly – in this case from the publisher – confirming that the issue had already been fixed.

This raising of PID-related issues is arguably something all actors big and small involved in the establishing and consolidation of the PID landscape can easily contribute to. One of the recommendations on the final report for the PID project asks for the implementation of support services for specific PID maintenance similar to the service run by Crossref to allow reporting on DOI failures. It will take some time for these sort of safeguard mechanisms to become implemented, but in the meantime we may all do our bit to build the plane as we fly it. 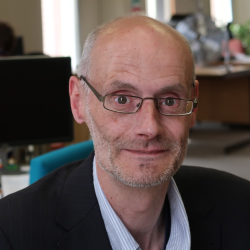